It’s been a long, trying 6 weeks spent stuck inside hotel rooms as the COVID-19 pandemic saw us plunged into a period of quarantines and uncertainty that spelled the end of our trip (for now). While we are sad that the trip is over, given the current global situation we are incredibly relieved to be back home.

This blog post picks up in a small town in the north of Perú called Celendín, where we found ourselves stranded when Perú declared a state of emergency, shut its borders, and imposed a 2 week national-wide quarantine period in an attempt to curb the spread of COVID-19. Private vehicles (including bicycles) were banned from the roads, there was an evening curfew, and only one person per household was allowed to go out at a time to go to the supermarket. Armed forces were in the streets ensuring compliance.

With only 24 hours notice given for the cuarentena we had no chance of getting out of the country, so accepted that we would be staying put for a while and stocked up on groceries and cash. The latter was a good call as within 3 days of the lockdown starting, 2 of the 3 banks in town were out of cash.

We woke to Day 1 of the cuarentena and the previously bustling streets were eerily quiet - the patrolling forces and the occasional stray dog were the only signs of life. The hotel staff had left. We registered our situation with the Australian Embassy, DFAT, and the Peruvian Government, and found some other Aussies stuck in Perú through Facebook. A group chat was formed that would become a lifeline over the coming weeks.

Day 2 of the cuarentena we got a phone call from the Peruvian Tourist board to check on our wellbeing. They asked about our accommodation situation and we told them we had been abandoned by the hotel staff. They called us back the next day and said they would organise for the police to move us to the nearby city, Cajamarca. We were unique among the Aussies stuck in Perú for having been relocated like this.

The next day two police officers came and drove us to The Tartar Hotel, Cajamarca, where the lovely Arturo had agreed to take us in. We didn’t know it then, but we wouldn’t leave the hotel for almost 4 weeks.

Waiting for the police to take us to Cajamarca.

Our home for the better part of 4 weeks.

It was around this time that Scomo invited all Australians to return home. With the borders and airports closed and ground transport prohibited we had no way of getting home by commercial means. The Australian Government told us that they had no plans to organise repatriation.

We and the other Aussies stuck in Perú spent the next few weeks contacting media and politicians trying to raise awareness about our situation so that we could get home. We did interviews with the SMH, The Daily Examiner, The Project, and 9 News. Perú extended the cuarentena (it’s still going at the time of writing this post), communication from the Australian Embassy was pathetic, and the Australian Government was maintaining it’s stance that it would not be organising repatriation flights (they had, however, endorsed a private charter flight being organised by a travel agent, Chimu Adventures, with economy tickets a cool $5100 pp - despite the exorbitant price it booked out within days). Meanwhile, we watched country after country bringing their citizens home. It was unpleasant to say the least. But months of bicycle travel has made us fairly resilient, and we had incredible support coming from friends and family back home.

Finally after almost 3 weeks of uncertainty, the Australian Government announced that they would be organising repatriation flights from Lima and Cusco. However, with the ban on private vehicles, road blocks, and police checks we had no way of getting to Lima. The Government said to stay put because there would potentially be another flight and they might be able to arrange ground transport. The uncertainty continued.

The first Australian repatriation flights departed and those of us left behind (either stuck in a rural location or missed out on seats on the first flights) were left wondering about our fate. Should we start applying for residency?

Thankfully, a few days later a final repatriation flight with connecting ground transport for rural locations was announced. That said, we didn’t breathe easily until we saw the bus pull up and had managed to get both our bikes and ourselves on it.

Health checks before we were allowed to leave Cajamarca.

A 20 hour bus ride later and we (and our bikes) were in Lima. Two nights in Lima and then it was finally time to leave. After health checks we were bused to the Military Base for check-in (the commercial airport had been closed weeks ago for the cuarentena). Even though we hadn’t been able to get boxes, the Qantas staff didn’t bat an eye at our bikes sitting amongst other passengers’ suitcases. Indeed, a shout-out to Qantas: the entire crew were absolutely amazing (and a special thank-you to whoever it was that allocated us to seats in Premium Economy).

It’s not often you get to walk up to a 787 Dreamliner! Even the Captain was taking photos.

Of course, the “fun” was far from over: we still had a 2 week quarantine period in Brisbane. In Perú we had at least been able to go into the hotel garden for fresh air and sunshine, but now we weren’t allowed to leave our room. At least we were back on Aussie soil and there was a known end-date. Being on the same time-zone also meant that FaceTiming with friends and family was far easier.

And now we are free! We are staying with Gabe’s parents on the NSW North Coast and were delighted to be reunited with our dog, Anna, who they have been looking after for us. We just went for our first ride in 6 weeks and even though we felt unfit it AWESOME.

We are sad the trip is over but we are incredibly gratefully for all the experiences we did have and, one way or another, we will definitely be going back. For now, we are content with local day rides and we are already planning some Aussie adventures (for when that’s allowed again). 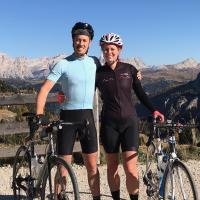 Two Sydney-siders now honeymooning in a tent as they cycle from Cartagena to Ushuaia over the Andes Divide.

Ecuador: Things You Should Know